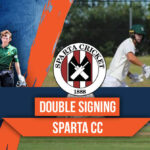 Sparta 1888 is delighted to announce the signing of young kiwi prospects Will Clark and Sam Ferguson for their 2023 Topklasse campaign.

Such is Clark’s all-round talent, he joined an elite group of cricketers when opening both batting and bowling for CD in only his second Plunket Shield (first-class) match against Northern Districts. He has since followed up with scores of 41, in his third Plunket Shield match against Auckland (April 2022), and 29* on his Ford Trophy (List A) debut against Wellington (Dec 2022).

It seems only a matter of time till Clark cements his spot across all formats for CD, in a side that includes the likes of Ross Taylor, Ajaz Patel, Will Young, Blair Tickner, and Doug Bracewell, to name but a few Blackcaps players’ representing the Stags.

Clark is an exciting talent, one who has been earmarked for international honours since his mid-teens. He starred for CD at both the U17 and U19 tournaments, culminating with NZ U19 selection. He has then excelled for Hawkes Bay, with scores of 201 and 120 in recent seasons. Clark has been a key figure for CD ‘A’ too, with notable scores of 120* and 97 to earn a Stags call-up.

Ferguson is an exciting batting prospect coming through the Central Districts ranks in New Zealand.

During the latter, he became one of the only cricketers to register a double century in New Zealand provincial age-group history, hitting 200* against Otago U17s. He would go on to top the tournament run charts (418 runs at 83.60) to include another big century (144) against Canterbury U17s.

Courtesy of his junior exploits, he was selected for the New Zealand U19 World Cup training camp but was unfortunately overlooked for the tournament team.

Nevertheless, despite his exclusion, Ferguson has continued to excel in cricketing circles, making a successful transition to senior men’s cricket in the Hawkes Bay playing Premier cricket for Havelock North Cricket Club.

In recent seasons, not only has Ferguson been his club’s top run scorer, but he has the ability to bowl spin and keep wicket. He is also a keen, and active coach within the club, and has led the social side in recent seasons. 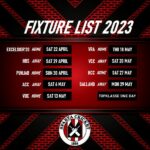 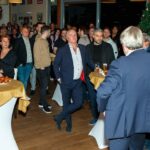 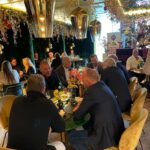 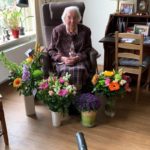 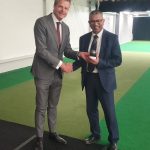 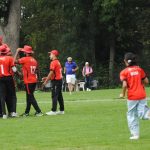 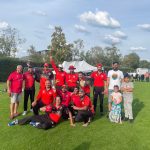 Sparta has convincingly defended the total of 138 in no more than 28.3 overs. In a direct confrontation to win championship, the Spartans were supreme on their field and bowling. Shahzad Khan exhibited a wonderful bowling spell (36-5) to help Sparta lift their cup.

This was the second occasion Spartans were facing Hercules (away ground on both). Spartans opted to bat first. The opening batsmen gave a good start for Sparta with a total of 60 runs in 12 overs. Unfortunately, a bunch of quick dismals led Sparta into a weak position. A mature Innings from Lovepreet Singh (35) and good contribution from Vishwdeep Vaid (40) and Wahab Umar (21) helped Sparta putting a total of 138.

Even though the Spartans were not able to put a big score on the screen, their confidence was no less.

Captain (Pradeep Chaudhary Kumar ) with his proven track record, proved it again with the selection of Bowlers. Shahzad and Rocky Pathania , took the new ball in their hands and started doing their magic. By end of 15 overs, the duo were able to restrict Hercules at 62 for 6 wickets down. Tom Hoornweg and Vishwdeep Vaid were able to do the incomplete job and led Hercules Back to Pavilion by the end of 28th over.

With “Never Give Up Attitude” from each Spartan, they were able to defend a low score. They exhibited their True class. 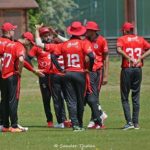