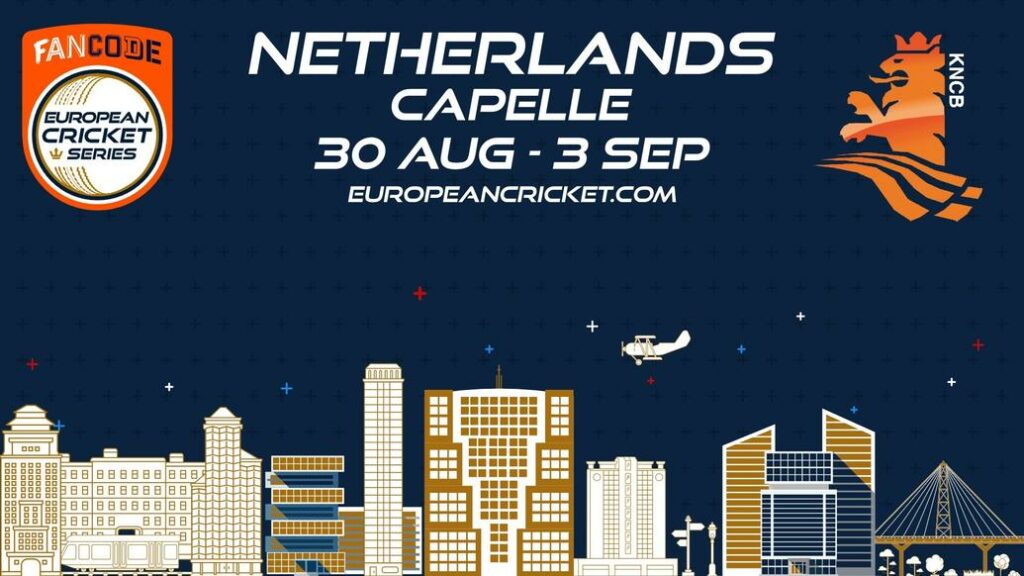 FanCode ECS Netherlands Capelle provides an opportunity for five teams contesting 24 games over five days to establish the Champions. Every game will be live streamed worldwide on the European Cricket Network and on FanCode – a multi-sport aggregator platform, from the house of Dream Sports for the Indian Sub-Continent.

Hosts Sparta Cricket 1888 (SPC) enjoyed a phenomenal run at European Cricket Series Capelle 2020 topping the league stages with a 5-1 record. SPC went on to win the tournament on home soil beating Excelsior 20 in the Final.

SV Kampong Cricket (KAM) had a mixed tournament last term winning just two of their six league games, but managed to bag Bronze medal honours beating fourth placed Voorburg Cricket Club. With the benefit of that precious ECS experience, KAM will be hoping for an improved showing this time around.

Formed in 2013, Liege boast a strong mix of young and experienced players in their ranks who have played at the international level and will be keen to show their talent to a global audience.  Liege will travel from across the border in Belgium to take part in FanCode ECS Netherlands Capelle, having featured in ECS Belgium last season. LIE ended with a 1-1 record in the group stages while their Shield Final was abandoned. On Dutch soil, LIE will be keen to go deep in the tournament this time around.

Formed in 1902, Veni Vedi Vici (VVV) is a multicultural club with six senior teams and four youth teams. VVV is one of the fastest growing clubs in the Netherlands with a good professional set up and overseas professional playing coaches every season. On debut, VVV will be looking to make a serious impression on the grand stage of European Cricket.

Mainly comprising members from India, Qui Vive (QUV) remains somewhat of an unknown quantity. QUV will look to spring a surprise or two against more fancied opposition on their ECS debut.