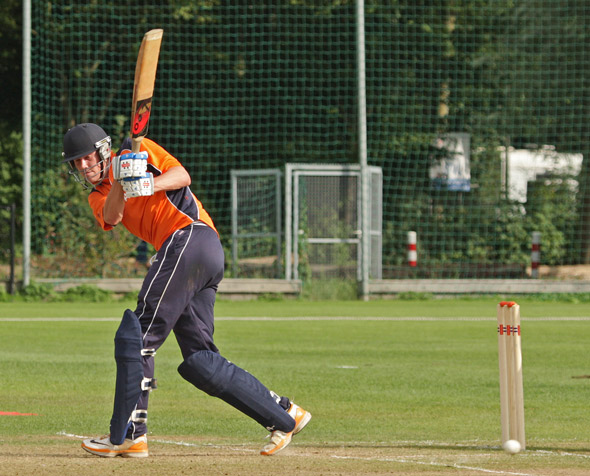 Gibraltar no match for Dutch XI
Bertus de Jong
27 August 2015
The KNCB select XI bested Gibraltar comfortably in Wednesday’s two T20 matches, chasing down 113 for the loss of just one wicket in the first and winning the second by 36 runs.

Kayron Stagno – click for full match galleryHaving won the toss and elected to bat, Gibraltar found themselves quickly on the back foot, Martijn Snoep and Joost van Kessel both finding early breakthroughs for the Dutch to see openers Ferrary and Pai back in the pavilion for one run apiece.

Number three Bacarese found the going no easier, struggling to 8 from 19 balls before chipping Saqib Zulfiqar to Snoep at cover. On a sluggish deck facing disciplined bowling none of the visitors middle order found any fluency, with the exception of Kayron Stagno who played with increasing aggression as wickets fell around him, his defiant 65 from 45 balls accounting for more than half the eventual total of 113.

Hopes of a more competitive total ended with Stagno’s dismissal in the 17th over, trapped LBW by Asad Zulfiqar. Julian Freyone would lift the visitors’ spirits with a sizeable six over midwicket in the penultimate over, but his 14 from 15 balls made him only the second Gibraltar bat to make double figures.

Dutch openers Rahil Ahmed and Saqib Zulfiqar made light work of the chase, scoring all around the ground in an accelerating 100 run partnership. Ahmed eventually fell victim to his own overexuberance, holing out in the deep off Dumas, but by then the game was all but done, Dirk van Baren finishing things off with a consecutive fours as the Dutch overhauled the target inside 14 overs.

By mutual agreement the KNCB XI would bat first in the second encounter, and a fresh opening partnership of de Graaf and Sikander Zulfiqar put the Dutch on top again, putting on a quickfire 83 for the first wicket. Mark Bacarese led a fightback for Gibraltar, accounting for both openers as well as Jochen Seenbergen as the hosts slipped to 112-4. Simon Dumas then saw van Kessel and Hnas back in the box cheaply to check the scoring, the KNCB XI having lost five wickets in the space of 28 runs.

But Asad Zulfiqar and Martijn Snoep made good use of the death overs, Zulfiqar dominating the scoring with an unbeaten 18-ball 32 as the pair added 45 in four overs. Snoep fell three balls from the close for run-a-ball 17, but with 181 on the board after 20 overs the game was the hosts’ to lose.

The Gibraltar top-order provided a solid base for a challenging chase, Bacarese building partnerships with Ferrary and Stagno to take the visitors to 80-2 in decent time before becoming van Kessel’s second scalp, caught in the deep for 35.

Avinash Pai looked to address the climbing asking rate, his 35 ball 52 keeping the visitors in with a shot into the closing overs, but he’d been left with too much to do in the end. By the time of Pai’s dismissal in the penultimate over, clean bowled by Steenberger, the asking rate was already approaching arithmetic impossibility and the hosts closed out a comfortable 36 run victory.

With rain swiftly putting paid to any hopes of play today the hosts remain undefeated for the tour, though Gibraltar can take encouragement from some impressive individual peformances, most notably from Stagno, Pai and Bacarese, and looked increasingly competitive as the tour progressed.